Back to all posts

I remember the first time I went to Israel. I can’t say that as a Jewish American boy I had a strong feeling about Israel as my homeland. I was there to be inspired and maybe have some new ideas for songs to write.   After the trip, I would go home the same person I was before I left and continue pursuing my music career. Little did I know I was in for quite a surprise!

When I arrived, the first place I went to was the old city in Jerusalem. I found a hostel to stay in and began to travel around. As my money began to dwindle, I decided to take some classes on Jewish topics, ranging from the history of the Jewish people to the holocaust. The classes were free, some were philosophical, and, honestly speaking, they were way more interesting and informative than other classes I’d taken that I had to pay for.

I remember a class about man's purpose in the world and I was amazed at how deep the topic was. It was certainly very different than the Judaism that I knew and had grown up with. To me Judaism was always about ritual observance, outdated traditions, and burdensome obligations. I didn’t see any meaning behind it. But now I was learning a whole philosophy that is the foundation of Judaism. I discovered that my religion thinks about really deep things and analyzes ideas and concepts. That was something I appreciated.

Every morning I would go for a jog and then spend the rest of the day going to classes and delving into books about spirituality. One day I found a book in English that was filled with inspiring stories about prophets. Reading it, I heard the dreamer in me say, “Yea, that’s what I want to be: a prophet!”  I know it sounds funny, but it wasn't funny to me. In fact, I was so serious about it that I decided to put music aside for a while and really focus on my spiritual growth. I was around twenty-five when I made this decision and the next time I would write a song wouldn't be until ten years later, when I would write Make me a Sage. The time I took off from actively pursuing a music career while I was learning did set me back in terms of my dream to be a rock star though. I mean when I began, I was nineteen with long hair and I had the look, if you know what I mean.  Despite all of that, my real dream was always to be able to share my ideas through music and inspire others. I would have never been able to write the songs I write today if not for the changes I made in my life, changes that led me from being a seeker to a finder

Ok, so what about the Rabbi part? Am I a Rabbi or not! Well, officially yes, I am a Rabbi.  You see, a Rabbi is a teacher, a teacher of life. He is also a spiritual resource for people interested in personal growth. I am an official Rabbi, with rabbinic ordination, but I wasn’t ever interested in having a position in a Synagogue.  I studied because I love to learn and after many years of studying I was able to pass the test!

The vision I have now is the same as when I began to write songs, which was to live life with my mind turned on to learning from the world around me and being able to share the message I learn with others through music. There was a time I had my doubts as to whether I would ever write another song and get back into music, but I attribute my inability to write to the fact that my personal outlook on life and the world around me was changing. I was in the process of integrating my new spiritual perspective with the truths that I already had inside of me, developing them and asking myself questions about what was really right, what was really true. While in this process, my outlook on reality was still being formed and not yet a part of my being. I wasn't able to articulate my new ideas because I still did not have a strong enough grasp on them to put them in writing.

So, allow me to introduce myself.  My name is Gedalya, also known as the Folk Rock Rabbi. I'm writing songs for everyone, not just Jewish people. Anyone and everyone who wants to hear something new and interesting is welcome to listen. I'm a self-taught musician, and my music style is inspired by the songs I grew up on, mostly top 40 and classic rock but I have ventured into other genres. I'm not a diehard fan of any particular artist. I like songs for the song itself. What the lyrics have to say and the music are what appeal to me.

Wishing you only good things, Gedalya

Here's a picture of me back in 1995 on my first trip to The Holy Land. I've also included my song Holy Soldier which was written in 2018 on another trip I took. Only good things! 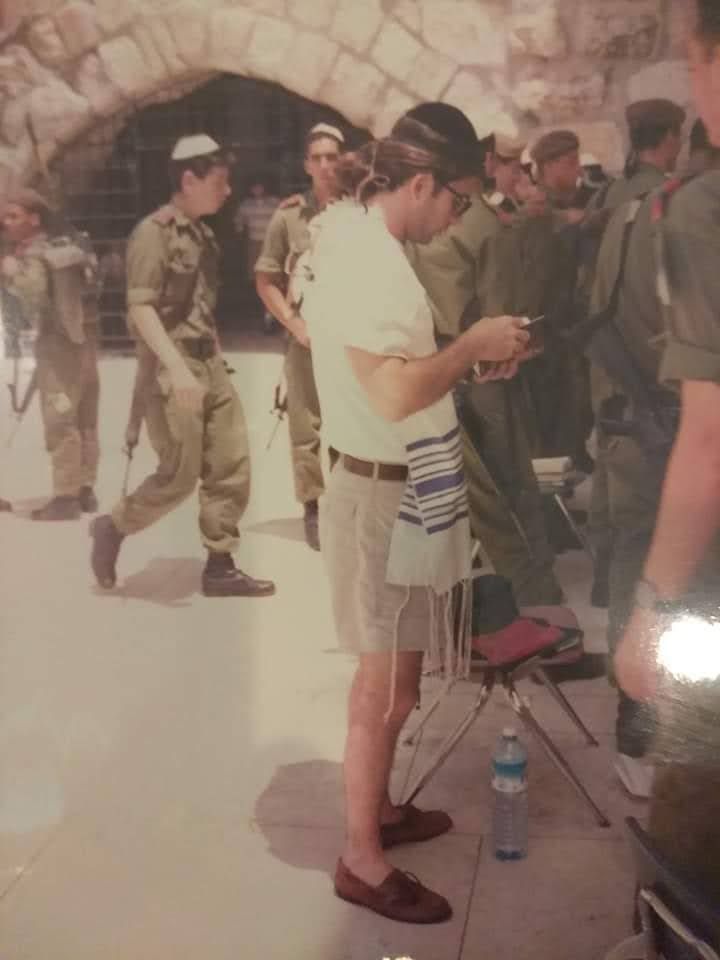